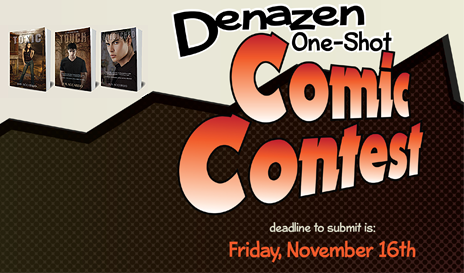 Read on for the official press release announcing the 2012 Denazen One-Shot Comic Contest!

(Fort Collins, Colorado) –Young adult author Jus Accardo and Entangled Publishing announce the 2012 Denazen One-Shot Comic Contest as a precursor to the release of Toxic, the second installment in the Denazen series. Toxic, the young adult paranormal romance, is expected to release on October 16th of this year.

The Denazen One-Shot Comic Contest runs through November 16th, 2012. Accardo, the contest promoter, hopes to find emerging talent in the graphic novel industry to bring the characters from the Denazen series to life. Partnering with accredited art schools around the country to help promote the contest, Accardo wants the contest to open opportunities for aspiring artists to build portfolios and secure footholds in the industry. Artists are invited to design a single panel comic storyboard featuring one of two select scenes from Touch, the first book in the series.

“I’ve always been a huge fan of comic art,” Accardo explains. “Books in cartoon form? What’s not to love? I thought, how cool would it be to combine two of my favorite things? Seeing characters from the Denazen series come to life in cartoon form would be the ultimate high for me. Boom! The contest was born.”

Touch is about a seventeen-year-old adrenaline junkie with a rebellious streak and a penchant for irritating her father. She goes on the run with a boy whose touch literally —kills—and inadvertently ignites a war between the powerful corporation who “owns” him and a rogue group of gifted Sixes determined to bring them down. The series has a distinct tough-girl heroine, X-men feel to it.

The participant who successfully conveys the pulse-pounding action and gritty feel of the series in his or her submission will be acknowledged as the First Place Winner of the 2012 Denazen One-Shot Comic Contest. The winning entry will publish as a full-page feature showcasing the art, artistic credit, and award in Tremble, book three in the Denazen series.

The winner will also have the opportunity to collaborate on future Denazen art, including promotional material, with the possibility of a graphic novel in the future. “I’d love to find the right artist to collaborate with,” states Accardo.

Those interested in getting more information or entering the contest should visit http://www.jusaccardo.com. For more information, interview requests, or review copies of the Denazen series contact Danielle Barclay, Publicity Director at danielle@entangledpublishing.com or (740) 404-4719 EST.

JUS ACCARDO spent her childhood reading and learning to cook. Determined to follow in her grandfather’s footsteps as a chef, she applied and was accepted to the Culinary Institute of America. At the last minute, she realized her path lay with fiction, not food, and passed on the spot to pursue writing. Jus is the author of YA paranormal romance and urban fantasy fiction. A native New Yorker, she lives in the middle of nowhere with her husband, three dogs, and sometimes guard bear, Oswald. She is currently working on her next book.

Learn more about Jus at http://www.jusaccardo.com and find her on Twitter at @JusAccardo.

The Talking Dirty with the CEO blog tour will leave you speechless!  Jackie Ashenden says it all in …