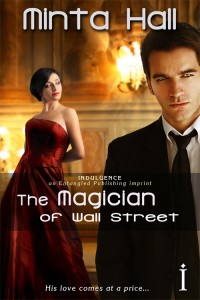 Here’s a bit of Straight Talk with Minta Hall.

I’d probably arrange a dinner party at my favorite restaurant, Sanders Ridge, in Boonville, NC. On Thursday nights they serve dinner family style, so I’d collect a bunch of fictional characters and kind of pair them up.

I’m thinking Katniss Everdeen from THE HUNGER GAMES would dine with Abraham Lincoln from ABRAHAM LINCOLN, VAMPIRE HUNTER; they could compare hunting strategies.

I’d seat Sonny, the robot from Isaac Asimov’s I, ROBOT, with Mary Shelley’s Frankenstein monster so they could discuss existential philosophies.

I’d have Harper Connelly, the girl from Charlaine Harris’s GRAVE SIGHT who sees dead people, dining with Harry Potter so they could talk about adapting the Muggle world to psychics and wizards.

As for me, I’d be off in the corner with Rhett Butler. What? You think I’d share him with a crowd? Are you nuts??? 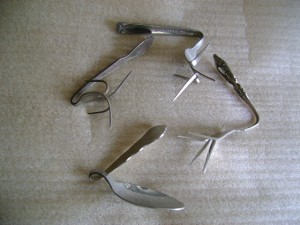 You may notice that all my stories have some kind of psychic twist. That’s because I’m really interested in psychic phenomena and occasionally teach workshops on how to become psychic yourself. Yes, it is possible to do that! One of the most fun things in those workshops is teaching people how to bend spoons with your mind. Turns out that it’s not only easy to learn how to do that, but nearly everyone can do it themselves. When I teach it, I don’t stand up and do it myself—it’s too easy to interpret that as a fake. Instead, I hand out forks (I like to use forks) to everyone and have them bend their own cutlery. It’s fun, it’s a little raucous when the whole group starts yelling, “Bend! Bend! BEND!!!” at their forks, but people take home some phenomenal souvenirs.  See the photo for examples of various forks and spoons workshop participants have left behind.

Oh, it’s very easy to come up with a brilliant. (LIE! LIE! LIE!)  The truth is, I am the world’s worst person at coming up with titles. I’m flat-out terrible at it. I always expect (hope) my editor will change my title because mine are universally awful. I tell myself that I’m simply too close to the story to come up with a great title, but that’s really an excuse. I’m just bad at it.

Oh my gosh. Yes. First, be persistent. Overnight success in writing take about 10 to 15 years to achieve. Be patient and be persistent.

Second, get over yourself. There has never been a writer who wouldn’t benefit from a great editor. Stop being super-sensitive and refusing to cut or change things. I promise you that at least 9 times out of 10, the editor is right and you are wrong.  While there are bad editors out there too, having a good editor will give you perspective on your writing and will help it shine as brightly as possible. I feel truly blessed by the editors at Entangled. I love them to death. They are quite simply the best in the business.

Third, study your craft and aim to keep improving with every book. I have a couple books I strongly recommend for beginners: John Truby’s ANATOMY OF STORY to help you plan your story to get solid story structure and a satisfying set of conflicts as well as to avoid the dreaded sagging middle; and Jack Bickham’s SCENE AND STRUCTURE to learn how to create proper scene structure when you start writing from the plan you created with Truby’s book.

Finally, write stories you truly love with characters you care about. If you don’t love them, your readers won’t either.

I am a recovering techie-nerd. My degrees are in physics/math, and professionally I worked for a long time in computer science, specializing in artificial intelligence and neural networks. And I also have been an instructor in developing psychic powers. And I write romance novels. Do you sense a disconnect among those?  Yes, that’s right. I’m weird.

My all-time favorite romance author is Jayne Ann Krentz. I’d love to “be” her when I grow up. (Assuming I ever do!) I think she’s a phenomenal writer and immensely talented. My personal favorites are her SF-romances, followed by her contemporaries. But I’m also an enormously eclectic reader, and love a boatload of writers and their books. Brunonia Barry’s THE LACE READER is fabulous in more mainstream fiction, for example; I love its paranormal twist!  Alan Weisman’s THE WORLD WITHOUT US is another that has stuck  in my head in nonfiction. And I have to say that Suzanne Collins’s THE HUNGER GAMES TRILOGY is phenomenal. I’ve read through the trilogy three times and seen the movie three times. Let’s not forget J. K. Rowling’s Harry Potter books—some of the most talented writers today are writing in YA, don’t you think?  I also like Jack McDevitt’s science fiction novels, particularly the Alex Benedict ones. Then there are Charlaine Harris’s books—all of them! My favorite is her Harper Connelly series, which I just heard will be a series on SciFi network this December. Gosh…I could go on and on. There’s a reason I have 7-foot-tall bookcases all over my house, you know! And a Kindle that holds something like 6000 titles—I’m good with that!

I am so much a plotter! Seriously. I definitely need to have a good bit of the story figured out before I start to write. Otherwise, I end up having to throw stuff out—and that’s painful!  So much so, that I’ll chop out the offending scene or chunk of text and save it in a separate file “just in case.”  I should add that never once have I ever gone back to use those saved chunks of text. But you never know!

I’m probably a poster child for “do not try this at home.” I am definitely a child of the television generation. So I mostly write in my den, with the TV on in the background. The den has a set of windows that look out on my small messy deck. But I created a fake table on the deck (boards on supports) just at the height of the window sill, covered it with plastic (an old waterbed liner from a friend) and I keep bird feeders there. So now I have birds coming down to nosh on my all-you-can-eat feeding station, and they’re about 3 feet or less from me! This spring I’ve gotten a ton of baby birds coming by too, once they’re fledged enough to fly.  It’s also visited by Alvin the Awfully Cute Chipmunk and Rocky the Not-So-Flying Squirrel and Mrs. Rocky. It’s fun. The birds are more distracting than the television, though! Inside, I positioned a large ottoman directly under the windows, so it’s just about sill height. My Feline Manager, Tinkerbell, lounges there where she can monitor me and the birds at the same time.

You know, until I got my Kindle Fire last Christmas, my answer would have been a hands-down a vote for  print books. But I have to say, I love my Kindle!  There are still things about it that are not as convenient as a print book, but overall, it’s a blast. So I’d say about 80% of my books are now bought in e-book form and print is saved for those books that are in some way “special” to me or that aren’t available in e-book form.  It also satisfies my need for instant gratification. (I’m so shallow!) Not to mention that my bookshelves no longer have to bulge from overflow.

THE MAGICIAN OF WALL STREET is the first of a series of books based around Abby’s funky New Age bookstore, the Tarot-A-While. Starting this fall, however, the following books will come out in the Covet line of paranormal romances, rather than Indulgence. You’ll see Abby and Oliver there, along with some new characters somehow associated with the store—customers or employees and so on. And I’d keep my eye on Selena and Jake from MAGICIAN. I mean, those two are at each others’ throats far more often than would be true if they didn’t have an emotional tie, don’t you think?  I think their story will bubble along for a while, but sooner or later…

The books will all have a theme dictated by a Tarot reading near the beginning of the book, and the paranormal level will be pumped up in the stories to be consistent with the new Covet line.  The mood of the stories will vary from adventurous to laugh-out-loud funny, but they’ll all have a paranormal focus.

About THE MAGICIAN OF WALL STREET

He’ll have to win her heart…and save her life

Oliver Pendragon’s days as the Magician of Wall Street are over. He’s lost everything: his business partner, his reputation, and the love of his life, Abby Daltry. When Abby’s father offers him a way to get everything back—including Abby—Oliver can’t refuse.

Abby Daltry wants nothing more than to break away from the controlling men in her life.  When a tarot reading reveals that she’s in danger and that her ex-lover will be returning to her life, she’ll do whatever it takes to prove her independence.

Oliver will stop at nothing to prove his love and to protect her from the man out to kill them both, but Abby finds out the truth about his deal with her father and issues an ultimatum: he can have her or the company. As danger looms and shots fly, will Abby give into the passion that rises to the Magician’s command—the Magician who all-too-easily controls her heart?

The blog tour for Blood of the Demon by Rosalie Lario begins today! We are celebrating the up…