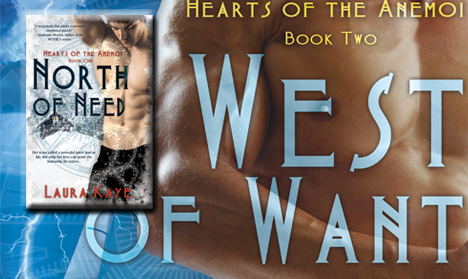 A lot of you have been ogling Lisa Kessler’s Night Demon cover (and rightly so).  It made the art department here pause in admiration, too–for a few minutes–and then they were off and running again, crafting another magnificently decadent and smokin’ cover, this time for Laura Kaye’s West of Want.

First, here’s North of Need, the first Hearts of the Anemoi novel.  It was released this month and is literally flying off the shelves!  With good reason–look at this cover, then read the blurb.

Her tears called a powerful snow god to life, but only her love can grant the humanity he craves…

To follow North of Need up, we now get to wait with anticipation for… 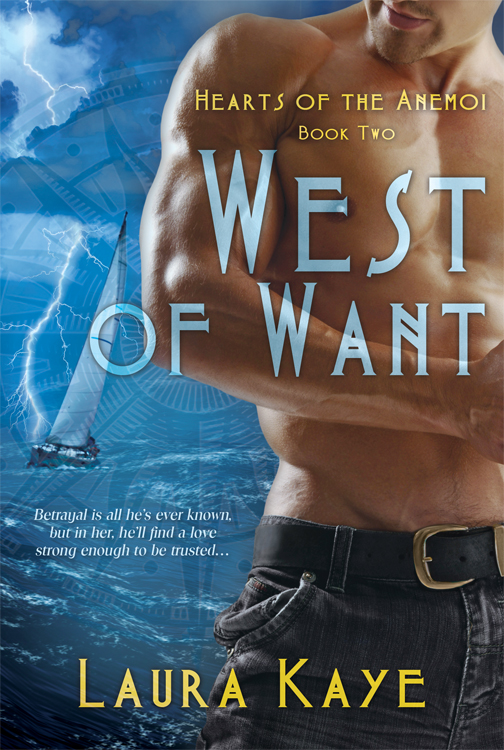 Betrayal is all he’s ever known, but in her, he’ll find a love strong enough to be trusted…

When Marcella Raines’ twin brother dies, she honors his request to be buried at sea, never expecting the violent storm that swamps her boat. Recently divorced over her infertility and gravely injured, Ella still fights to survive.

Zephyros Martius is the Supreme God of the West Wind and Spring, but being the strongest Anemoi hasn’t saved him from betrayal and loss—worse, he’s sure his brother Eurus is behind it. When Zeph’s heartbreak whips up a storm that shipwrecks a human, his guilt leads him to save her, but he vows not to get involved.

Ella’s honesty, empathy, and unique calming influence attract Zeph like no other, and he finds himself wanting…everything. Ella knows Zeph’s different and fears rejection, but falls for his otherworldly masculinity and ancient, sad blue eyes. When Eurus threatens Ella, she and Zeph struggle to let go of the past, defend their future, and embrace what they most want—a love that can be trusted.

Get your winter on with North of Need

Starbucks announced their pumpkin spice lattes are back and it’s almost cold out. Almost. Unle…