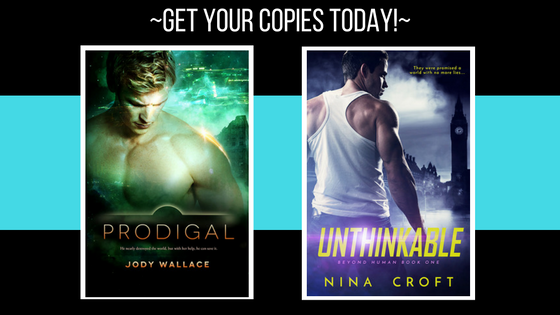 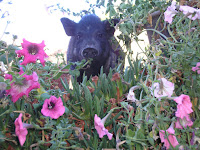 Piggles is a three-legged Vietnamese pot-bellied house-pig who lives with Nina on her almond farm in southern Spain. Her favorite things are eating potato fries, snuggling under the duvet, and having her tummy rubbed. All three at once is usually best. 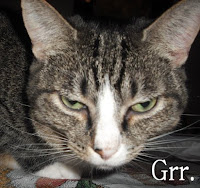 Meankitty is a now-elderly grey and white tabby who was once famous on the internet before social media was a thing. She lives with an author human and tries to tell her what to write, but since you probably haven’t heard of the author human, obviously the human isn’t listening to Meankitty’s great wisdom. Her loss, am I right?

Continued from part one…

5) Meankitty (MK): What are your favorite works of fiction or cinema involving cats or favorite fictional cats?

Nina Croft (NC): Cat people – I love that movie. Alien. Mister out of the Dresden Files.
Piggles: What are your favourite pigs from anywhere? Has Meankitty ever met a pig?

MK: One of the human’s friends has two pigs and the videos are a good time. Never met one outside a petting zoo, though. Curious to now!

6) MK: Do you like the first Babe movie better than Babe: Pig in the City, which was freaky as crap?

NC: Loved Babe (interestingly, I first watched it while eating suckling pig in a restaurant in Bali) and hated Pig in the City. My favorite line in the film was actually from the cat and something to the effect of – Pigs aren’t allowed in the house—not live ones anyway. Piggles, while snuggled in her duvet in front of the fire, always has a good laugh at that line—what do cats know?

Piggles: That was one mean cat in Babe—so why do cats have to be mean? Do you know any nice cats?

MK: Nice cats are lame and unimaginative, but yeah, they exist. There are three in my house right now. I’m not one of them. BRB, just spotted my least favorite new cat in the hallway…gotta kick some hairy grey butt.

7) MK: Tell me a funny story about Piggles.

NC: Piggles says she does not exist to provide amusement. Having said that there was this one time… Piggles was standing at the bottom of the drive with my dog, Lola, just watching the world go by, when this whole bunch of cyclists whizzed past. All wearing really tight lycra—enough to make any pig grunt. Anyway, they were almost past, when one of them spotted Lola and Piggles, obviously thought it was two dogs, thought again, looked back,and cycled straight into the side of the mountain (lucky really…if he’d gone the other way he’d have vanished over the edge.) Obviously, he wasn’t hurt. Otherwise, no one but a cat would have found it in the least funny. Piggles had a snigger.

Piggles: Tell me a scary story about Meankitty, because seriously, cats are scary.

MK: I’ll just hook you up with a video, okay? I don’t like cats outside my house. This is me being bad ass:

8) MK: Seems like you mostly write romances with speculative elements. Is it because you just like to make stuff up? That’s what my human does.

NC: Exactly. I do actually write contemporary romance as well, but there’s always some point in the writing where I really want to…make stuff up, throw in vampire, or a dead body, or an alien space ship….

Piggles: You write science fiction and aliens. Do you think that cats could actually be aliens and what evidence do you have for this?

MK: Our alien overlords are already among is, is that what you’re saying? Yes, I do think this is quite possible. It makes me think of this fantasy novel by Diane Duane called The Book of Night With Moon. It’s about wizard cats who get stuff done even though the humans don’t realize they all depend on cats to keep them alive. It’s a companion to Duane’s Young Wizard YA fantasy books.

9) MK: If you were going to write a shape-shifting pig hero, assuming you haven’t, do you think you could manage to avoid all “male chauvinistic pig” and “bacon and ham” jokes or would you be cracking them, like, every page? Who would the heroine be in the pig shifter book?

NC: I’d never crack a joke at a pig’s expense, but if this book were to ever come to pass, I’d get Piggles to critique it for me just in case I slipped into any bad habits and unsuitable humor. I think the only woman who could fall for a pig shifter is another pig shifter. But how does that even happen – bitten by a werepig?

Piggles (a little wistfully): Have you ever written a hero who might fall for a very beautiful werepig?

MK: Not…yet? But I don’t see why the Big Bad Wolf couldn’t fall in love with a werepig. Opposites attract, and also the werepig’s housebuilding skills are enviable.

10) MK: What would Piggles like to tell everyone about living with a writer human?

NC: It’s absolutely fabulous of course (She knows where her next meal is coming from.)

Piggles would like to ask Jody what it’s like living with a mean cat and has she ever thought of upgrading to a pig?

MK: She used to want a pig. She liked how smart they’re rumored to be. Then again, she used to live in the countryside where there were no stupid HOAs and zoning rules about what domestic and farm critters you could and couldn’t have. If she decided to add a pig to the six-cat house she currently lives in with her husband, two kids, and Grandma, it might be tricky. Plus the yard is crap. Not that *I* go outside. Outside is for plebian cats. But pigs like it outside, I hear.

Missed part 1 of of the interview? Click here to read from the beginning!  Plus, don’t forget to click here to enter to win one of our Creature Feature Packages!

Behind the Book: Seducing the Tycoon by MK Meredith

1 Reply on Piggles vs. Meankitty: Part 2